OK, I’m going to be honest… I mean, that’s what this blog is all about, right?

So here it is:

Well, let’s look at the clues:

1. Tom Cruise cast as Reacher in the forthcoming films?

4. Every series runs out of steam eventually.

I have read approximately 12 or 13 Reacher novels and I came to the game late on, so I started at the beginning already knowing how popular they were.

At first – I loved them.

After about 5 or 6, I started to skip paragraphs.

At book 9, I had really tired of the repetitiveness.

I kinda wished someone would shoot him once and for all. 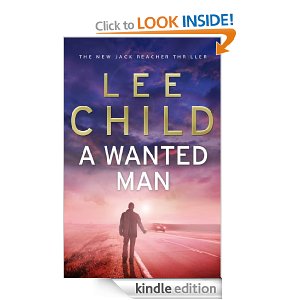 ‘A Wanted Man’ is Lee Childs’s 17th Reacher novel. How many is too many?

Well, here’s what the review spread looks like for his latest offering:

I have said before on BtB that some of my favourite writers have suffered from the same problem. Not knowing when to quit.

How many times can your hero be in the wrong place at the wrong time? Just how many miles can one man cover? And what about the amount of times Reacher evades capture or death? No-one is that invincible… (think Jack Bauer).

“Being a big fan of this series I thought I’d buy this book hoping that it wouldn’t be the same as his other recent efforts which are painfully obvious that he is running out of ideas. I’m not gonna spoil the plot and if you like these books its more of the same but please as a fan can you go back to the more interesting less generic plot based books like the earlier ones. A little bit more realism wouldn’t go amiss or now that Tom Cruise is on board (worst casting ever in my opinion) will the books just become Mission Unreadable………..”

“I have read every Reacher novel, many more than twice. I have just put this one away a little over half-read, half-finished. I didn’t have the stamina to trawl through the rest of the pages as I kept falling asleep. Reacher sitting in a car talking (that sums up the entire first half of the book) Not for me.”

“Quite the worst Reacher yet.
To date I have read them all with pleasure and recommended them widely to friends and fellow would-be authors (like me) on my writing course for their sustained pace and Child’s story telling skill. Yes I know they’re not Dickens, but… I like the improbabilities and the quirks of the author and the character.
And, yes I finished this book. Simple (usual type) of plot. That’s ok by me. But for the first time I found myself skipping boring bits – got fed-up the long, piled on, details. The double, sometimes quadruple, adjectives apparently to get the required word count really got to me.
Perhaps I have simply over-Reached myself. And, sadly, I think, fear, Reacher, Child and I may be coming to the end of a great friendship which has been rekindled every year for some time.
I lost account of the body count too – I wonder if anyone has calculated it for the entire series?”

Ok, so I have picked some of the more damning 1 star reviews to demonstrate my point. There are others and not all read like this, but you get my drift and, I happen to agree.

For me, it’s a real shame. It’s also a bit of a piss-take. Have you seen the price of this book?

When you have written as many books in a series as the times Reacher has had his nose broken, and it’s the same stuff regurgitated and spat into the desert dust, it’s time to think of something new.

Surely it’s only fair to your readers too?

Even the blurb/product description on Amazon looks and reads to me like Reacher must feel.  Downright knackered and in need of a good bath and clean sheets.

When you’re as big and rough as Jack Reacher – and you have a badly set, freshly busted nose, patched with silver duct tape – it isn’t easy to hitch a ride. But Reacher has some unfinished business in Virginia, so he doesn’t quit. And at last, he’s picked up by three strangers – two men and a woman.

But within minutes it becomes clear they’re all lying about everything – and then they run into a police roadblock on the highway. There has been an incident, and the cops are looking for the bad guys …

With his signature Swiss-watch plotting and heart-thumping suspense, A Wanted Man shows Lee Child at his sublimely skilful best.

‘He could take out Bond, Dirty Harry, Jason Bourne and Ethan Hunt with both hands tied behind his back,. And then sleep with their girlfriends two at a time before getting the last bus out of town’ Sun

Look, Lee Child is one of the greatest, most-successful writers of my generation. Fact. He’s brilliant.

What that doesn’t give him (or more likely his publishers) is the right to rip off readers and take advantage.

BtB doesn’t do advice giving, but if it did, it would be this:

Jack. Stick your meagre belongings into a nondescript duffel bag, borrow a few bucks (that you’ll never return) from the plain, but pleasant-looking waitress that served you an average coffee and took you home last night and catch the next Greyhound out of nowheresville.

Sit in the middle of the coach so as not to attract attention and get off when the batteries in your stolen 80’s Walkman run out. Walk twenty miles or so in the rain, wind, sleet and probably six foot of snow until you see the warm, inviting glow of light through a wiped out circle in the grimy windows of a ramshackle diner. Drop your duffle in the nearest battered chair, smile at the Sheriff (pulling the collar up a tad further around your ears as you do so), order grits and bacon and slide a newspaper discreetly across from the opposite table.

When the pretty-but-weathered girl takes your order, ask her for a pen (did I mention she looked like she had demons but still managed to smile and it lit up her face?). Take said pen between your gnarled fingers with the dirty, bitten-to-the-quick nails and circle the ads for handymen wanted in the next town with a funny name.

Go to town, lie about your name and take the first job that comes with a rusty but perfectly adequate bed and sleep with one eye open, always. Let’s face it, you’ll never be late for work.

Don’t shoot anyone and never tell them what you used to do for a living. Stay there.

Until next week… say no to crap and walk around piles of anything that has steam coming from it.